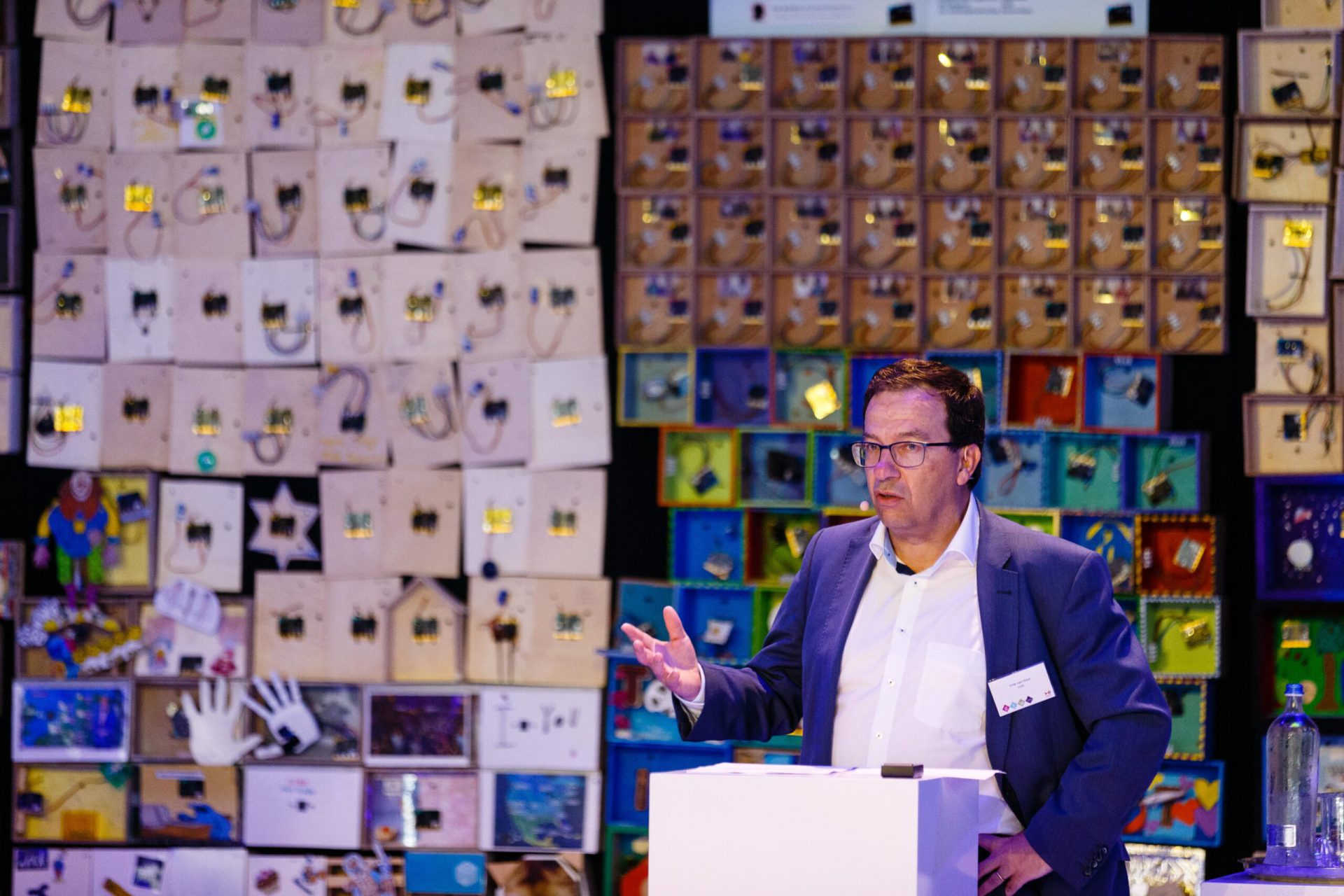 It was 2011, Brainport had just been proclaimed the smartest region in the world. A title with status, but also one that can only be achieved once. And so the region’s hotshots pondered the question of how that success could be visibly followed up. After a few meetings, the brainstorming session led to the completion of a plan that had already been simmering for some time: an annual technology festival, soon to be branded Dutch Technology Week. The idea really came “in the spur of the moment”, Frits van Hout remembers. It remains unclear whether it originated from Mayor Rob van Gijzel or from Rob Fastenau, who at the time had just exchanged FEI for a position at Delft University of Technology. Perhaps it was Frits van Hout himself, the man who now leads Dutch Technology Week for the tenth time this year.

Even more likely is that it was a joint action; not just of these three men, but of an entire region. Because that’s how these things go here, says Van Hout, who recently stepped down as director of ASML. “One person has a question, another the answer, and the next time it’s the other way around. We are so used to helping each other here in this environment that we have started to take it for granted. But it would be good to realize a little more often how important and special that achievement is. You only see that here.”

Creators and makers
After the decision, some tough questions had to be answered, Van Hout recalls. “What we knew for sure is that this intitiative should help make technology more accessible. Not just for the experts, but for everyone. But how do you do that? Who’s going to participate? And who’s going to pay for it? To channel those kinds of questions a bit, they asked me to be chairman of the advisory board.” Laughing: “‘It will hardly cost you any time’, they added. Well, ten years later I know better, but in all honesty, that’s a good thing!

During their preparations, the board members noted that young people were interested in technology, but mainly as users. “To actually help build it was another story. And because already then you could see a shortage coming in both the creators and the makers of the technology of the future, we knew what we had to do.” It’s a frustration Frits van Hout had then, but still hasn’t completely lost: there is far too little appreciation for people who work with their hands. “But it’s very simple: If you can’t make it, then thinking about it makes little sense. Fortunately, we do see that respect for this sector is increasing. The realization that technology contributes a great deal to improving the world is becoming increasingly clear. To cite just one recent example: without the gigantic computing capacity of modern computers, we would never have succeeded in getting the first Corona vaccines into production so quickly.”

From the beginning, Dutch Technology Week has been aimed at both thinkers and makers; the scientists as well as the ones to implement it. “But to be honest, it is perhaps most important for the latter group. Because for the scientists the market is as big as the world, but on the maker side the cross border mobility of people is traditionally a bit less evident. This means that the capacity of regional education must be increased, but also that more young children must be made enthusiastic about this beautiful field of expertise.”

Nobel Prize winners
And that is exactly what the Dutch Technology Week has been doing for the past ten years. For Frits van Hout, looking back, it is a series of highlights. It started right at the first edition, with two Nobel Prize winners in the program who gave the message to always persevere to achieve your goals, even if no one around you believes in success. “That’s exactly the advice I’m so eager to pass on to all those kids who start getting a sense of technology. And in doing so, I always link theory to practice. Theorists are super good at coming up with models; as a physicist, I know that all too well. It is then up to us to start testing those dozens of possible models in practice – and then dozens more.”

After the Nobel laureates, many other figureheads of technology have passed by over the years. Van Hout remembers exciting sessions with people like André Kuipers, who was asked by his young audience how you can actually pee in space – and gave a detailed answer. But just as important are the recurring successes: program components such as Quiz Night XL, Night of the Nerds and the High Tech Discovery Route. And in all of them, it is the children who manage to steal Van Hout’s heart. “Like with that test setup where it had to be demonstrated how a phone ‘knows’ that it should show a landscape or portrait image. At the end of the session, one of those seven-year-old girls walks back to her father and says: ‘Let me explain to you exactly how that works’. That sense of wonder for technology is worth its weight in gold.”

Gradually, Frits van Hout has also seen his DTW become more serious. It is no longer just technology marketing in the form of a festival. Internships are arranged, job interviews are held, international guests visit the event, and important topics are put on the agenda, such as the consequences of a numerus fixus for a number of technical programs. This year’s program, partly physical and partly online, is something Van Hout is again very proud of. With many familiar events, but also some innovation in the form of a series of DTW Talks, a “chain reaction” in which 14,000 elementary school children participate, and several new program elements. “Corona, of course, remains an obstacle, but it also offers us new opportunities.”

Once a year
By now, Dutch Technology Week has managed to proof itself as an indispensable program for the industry and the region. But that does not mean that the concept for the coming years is already set in stone. “For example, we are faced with the choice of continuing to focus on this single week a year when everything comes together, or perhaps spreading the activities a little more over the entire year. Both options have advantages and disadvantages.” To better make that choice, a study is currently being conducted to determine the most promising option. This study will also look at the question of whether it should remain an event concentrated in Eindhoven, or whether a national or international version could perhaps be created.

Van Hout is already convinced that ‘Dutch Technology’ appeals to the international imagination. “Maybe it’s not as much of a concept as ‘Dutch Design,’ but there is definitely a Dutch way of developing technology. And the whole world is curious about that.” What that study should also make clear is whether, as is the case with Dutch Design Week, there should be a structural organization behind the event. Now it is a project organization that becomes more active as the DTW approaches, but is not there all year round. “Anyway, we do need a certain scale for that, also financially. And perhaps by definition such a strategy means that you should focus it a little less on Brainport Eindhoven. Ultimately, we belong on the world stage, but we can only do that step by step.” Currently, the DTW has a central budget of around €300,000, but all activities within the DTW have their own budgets and responibilities.

Two generations
Frits van Hout has now said goodbye at ASML, but that doesn’t mean this is also his last year at the DTW. Or does it? “I enjoy this task so much, continuing won’t be a problem. But at the same time: there are almost two generations between me and the youth for whom we do all this, so maybe it’s time for a younger person to succeed me. In any case, it is good to refresh your organization from time to time so who knows, maybe I will be handing over the baton soon.” To add immediately: “Although I already know that, if that moment does indeed come, I will be missing the DTW immensely.”

This also becomes clear when, at the end of our conversation, we ask Frits van Hout about his absolute highlight of the past ten years. “There has been so much that I think back on with great pleasure. But if I could mention just one thing, it would be the fact that our team has stayed together right from the start. Gradually people have joined, of course, but we are all doing it voluntarily, without any legal organization, full of enthusiasm and with that wow-feeling year after year. How many places can really offer anything like that? Around here, we think it is normal, but perhaps it is very special. So many talented people together who all don’t have to think for a second if they can help another person or organization with something. That urge to work together applies to the entire region, but very specifically also to us as a DTW team. That makes me immensely proud.”