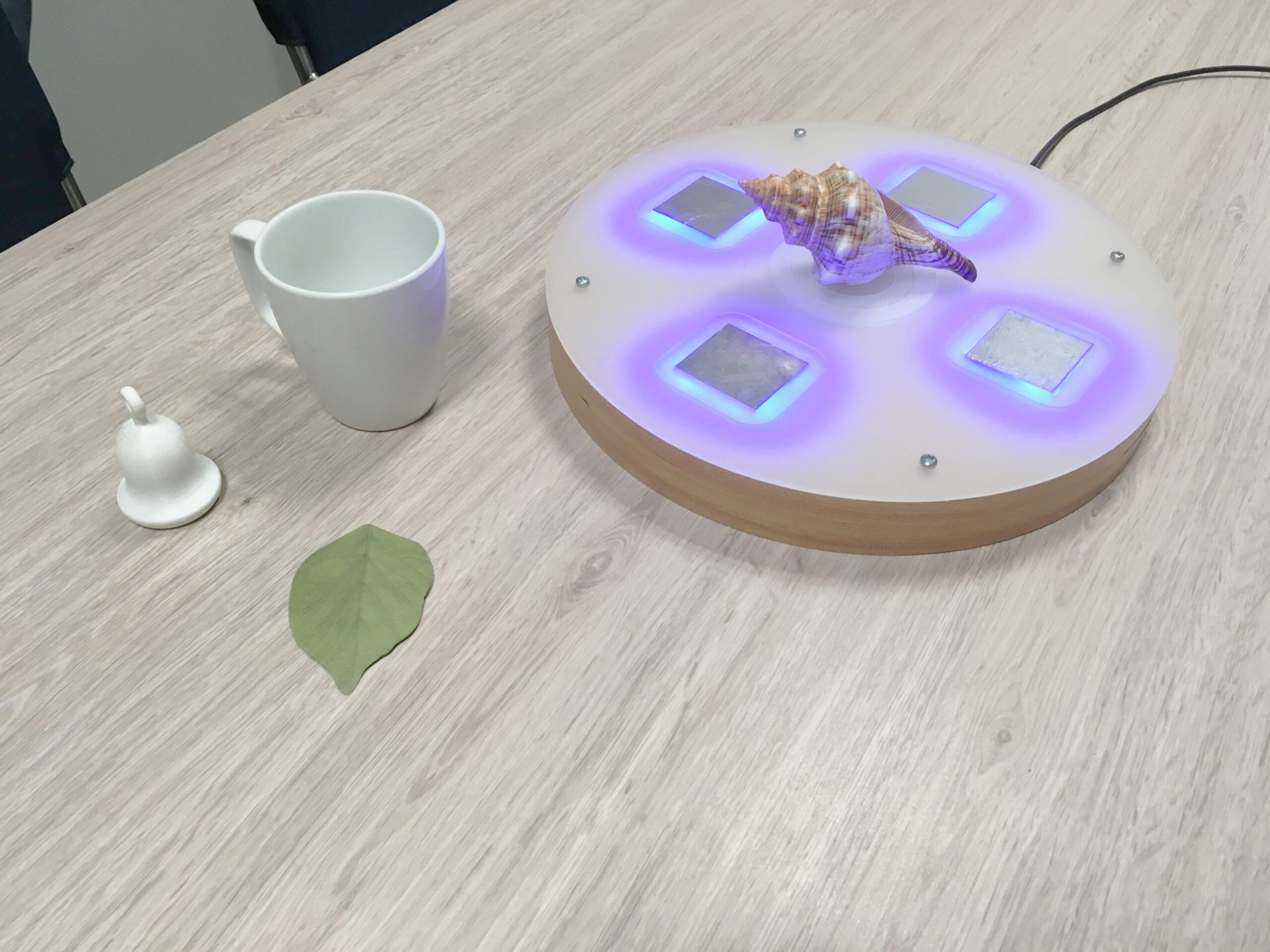 Healthtech plays an increasingly important role in the quality of life

Healthtech aims to improve our lives so that we become healthier and stronger, not only physically but also mentally. There are consequently numerous researchers and companies working on the development of these types of technologies. One example is AlphaBeats, the Eindhoven-based start-up that combines biofeedback with music to reduce the effects of stress.

Inner peace creates outer peace
The company will soon start beta testing. Around 1400 people have already signed up for this. CEO Han Dirkx explains: “There are plenty of people who are interested in tech-based solutions for stress-related problems. Our vision can be summarized as ‘inner peace creates outer peace‘. When you are mentally fit, this has an impact on your partner, your children, your street and ultimately on society. We even think that having enough people who are mentally healthy can have an effect on the whole world. For example, it can lead to a decrease in violence.”

Different target groups
For now, AlphaBeats has no ambitions to develop a large app that everyone can download and use. “We see ourselves more as an insider technology,” Dirkx goes on to explain. “Stress manifests itself in so many different ways. One person may not be sleeping well, another may be suffering from anxiety, you name it. That’s why we’re looking to collaborate with parties that are focused on the wellbeing of specific groups. For instance, we could become part of a burnout prevention program at large companies. But we could also become a feature on an app that supports pregnant women.”

Corona stress
AlphaBeats’ technology could also prove to be of great value when it comes to stress caused by corona. Dirkx: “Before corona existed, the World Health Organization already said that stress is the health epidemic of the 21st century. Corona has only made that worse and it has led to a lot of very unpleasant situations. We definitely think we have a role to play here. In fact, a fair amount of the attention that we’re getting is related to the increased levels of stress caused by corona.”

By making the technology available to several different partners, Dirkx hopes to reach as many people as possible in the near future. “Once we have our service up and running, anyone can use it. Expensive wearables won’t be necessary. Anyone with a smart phone will soon be able to measure their own biosignals.”

Everyday Sounds of Dementia
Another interesting healthtech development is the Dutch-based Everyday Sounds of Dementia project. This three-year project was set up in early 2018 by the Eindhoven University of Technology, Tranzo (Tilburg University), Coöperatie Slimmer Leven (Smarter Living Cooperative),and Archipel Zorggroep Eindhoven. The project is investigating how sound can have a positive impact on people with dementia.

Maarten Houben, PhD student at the department of Industrial Design at TU Eindhoven, explains: “We are studying the role of sound, more specifically environmental sounds and tones, in terms of technology and design for people living with dementia. We’re starting from a very exploratory perspective. We know that music can have a great impact on people with dementia. Based on that, we are looking at what we can do with everyday sounds from our environment. In fact, very little research has been done on this, which is why there is a knowledge gap here. We are tapping into that now. We want to know, for example, how we can use sounds and everyday noises to trigger memories. Can we use those sounds to stimulate social interaction? Can we calm people down? – Or even make them more active? Can we influence emotions?”

Along with this scientific perspective, the methodology used is also very important in the study. “We don’t play bird sounds all day to see if that makes people happier. We are trying to design objects that play specific sounds to improve the quality of life of people who have dementia. By using those objects, we are able to more accurately capture people’s personal reactions. This is how we really include their own personal perspectives in the research.”

Sound board
Houben and his team developed several objects as part of the project. For the first study, they used a sound board on which multiple interactive sounds could be played. “For example, we had quiet sea sounds, but also sounds of seagulls and children playing. We gave the participants a shell and by placing the shell on the object, they could play those sounds themselves. There were four buttons around the shell which people could use to turn the individual sounds on and off.”

The study revealed that this activity creates a pleasant experience for many people. “We can really trigger something in these people with sound. For example, retrieving a meaningful memory can provide a sense of self-satisfaction and lead to positive emotions.”

Home situation
In this preliminary study, the main focus was on the emotional aspect and on eliciting interactions. In the next phase of the project, the researchers were more focused on storytelling. ” In this, we started looking at the home environment. This time we really wanted to use personal sounds. Here you can imagine sounds from childhood or student days. Or sounds associated with hobbies or vacations.

The object we used was a kind of extension of the sound board. It allowed people with mild to moderate dementia to create a timeline of their own lives. You can compare it a bit to a game. Family members often play an important role in recalling stories and life events, but by presenting the object in this manner, the person with dementia can also give their own interpretation of these things.”

Perception-based technology
Houben points out that this form of emotional experience is very important in a home situation: “People suffering from dementia are mainly provided with functional technologies in the initial phase, such as a calendar or a medicine container. However, particularly in times of corona, it is vital to go for a much more perception-based technology.”

Drawing on this research, Houben came to the conclusion that the objects and the methodology used are very closely related to the associations invoked by the sounds. In other words, the design of the objects plays a crucial role. Houben: “You are better able to turn the associations into a worthwhile conversation and a meaningful experience. It also proved to be very valuable for caregivers. For example, they reported that they could get a better picture of the person as an individual, which ultimately contributes to more effective person-oriented care.”
VITA sound cushions

Lastly, Houben carried out research with people who are in a later stage of dementia. “The VITA sound cushion was developed in collaboration with the Dutch healthcare organization Pleyade in Arnhem. People with advanced stages of dementia can use it to play sound and music on her own.”

VITA is a soft cushion featuring six surfaces under which sensors have been fitted. The electronics and speaker are integrated inside the cushion. People with dementia can then play sound or music by simply placing their hand on one of the surfaces.

The cushion was used for individual therapy, among other things. “We used it with someone who was bedridden. He was a huge fan of cars and we played racing sounds through the cushion. That did spark something,” Houben says. “The cushion provokes playfulness and curiosity and can as such be used to break entrenched routines.”

It even turned out that a form of non-verbal interaction was possible through the use of VITA. “Yes, it was nice to see that some people imitated the sounds. The caregivers responded by imitating the sounds back. So, there was some interaction after all, a form of contact.”

No right or wrong
Although the sounds did not have the same effect on all participants, Houben is very excited about the possibilities for the future. “It’s an interesting field of research. But in any event, the sounds offer lots of opportunities to provide new and meaningful experiences. The main lesson is that sound is a very accessible way for social activities with people who are affected by dementia. The sound brings out something that has some form of truth for that person. There is no right or wrong.”

Houben is pleased with the wealth of knowledge and many practical insights that the project has yielded. He concludes by emphasizing that a personal approach is indispensable in this kind of research: “As product designers, we really have to interact with people and be present in the context of the nursing home or domestic situation. If you want to get good results, there has to be a relationship of trust of some kind. You cannot set yourself outside of that setting or that context.”

For those interested in learning more about recent developments in healthtech and medtech, the following online events are being held during the Dutch Technology Week:

The AI Connect festival from start-up FruitPunch AI on Thursday, June 3 from from 10 am to 4:30 pm

DTW Talk Mensgerichte wearables on Tuesday, June 1 from 9 am to 9:25 am.