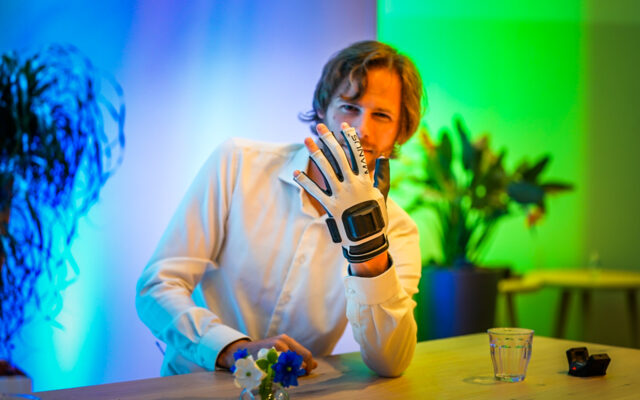 Rabo@DTW Talks: Start-ups share their story about starting and growing in Food-, Med- and High Tech

From agriculture to health care: Technology is used extensively in all sectors of society. Starting a business, or growing as a business in Med Tech, Food Tech, and High Tech: how is that looking? Start-ups and investors were guests during the Dutch Technology Week 2021. They all spoke about the technologies that they have developed and about their position on the market.

Starting and growing in Med Tech
The second day of the DTW focused on the application of technology in the medical world. Two young entrepreneurs, Freek van Welsenis and Bas Zeper, talked about their companies and engaged in a conversation with John Paul van Heel of Rabobank, who is supporting the companies.

Freek van Welsenis is the co-founder of Hable One. The company manufactures a wireless smartphone keyboard that uses Braille input to type. It is the world’s smallest braille keyboard and can be used by both IOS and Android devices. Hable One has been experiencing significant growth recently. “We are now in the Netherlands, Belgium and in the United Kingdom. Our company is easy to scale up internationally and we have built a large international network in a very short period of time.”

The secret? “We did a lot of interviews around the world and then suddenly someone you talk to turns out to be the boss of a technology company. That’s how the ball starts rolling.” The company’s growth is accelerating rapidly. At the end of the month, the Hable One will be actually launched on the market. “It’s about 600 units, but most of them have already sold out,” Zeper says.

Technological plaster
Zeper is the founder of Plasmacure. This company developed a method to help people with chronic wound conditions by closing the wound using a special type of technological plasma. The technique in the “technological plaster” disinfects wounds and triggers the wound healing process. “We are proud to have gotten so much technology behind a small button,” Zeper adds. Plasmacure is currently working to collect as much data as possible. They are doing this in collaboration with wound centers in the Netherlands. Like Van Welsenis, Zeper hopes to eventually be able to internationalize. “Our ambitions lie far beyond the Dutch borders.”

Starting and growing in Food & Agri Tech
The third day focuses on technology in agriculture. Yield Computer helps small fruit growers predict their harvest by means of a camera system and data analysis. By doing this, the company contributes to more sustainable horticulture. This tech company is also supported by Rabobank. The Managing Director of the company, Theo Slaats, shares the the table with Maarten van Genugten of Rabobank (see the above video).

It is precisely in this sector that digitalization is sorely needed. As such, Yield Computer comes at just the right time. Slaats talks about how technological innovations are being applied. “You see that this digitalization has passed this sector by. The amount of data that growers collect is actually pretty limited.”

As a matter of fact, data collection did not have much added value until now. “No grower is going to say: ‘Let me collect data on a large scale just for fun.’ In that case, a solution really has to be built from that.”

Although Yield Computer is currently still in the development phase, the company intends to come up with these kinds of solutions in the future. “Six months ago, we were still a pilot company. Now we have entered the ‘scale up’ phase, we can already deliver real value to growers. The data allows growers to predict more accurately what they are able to produce. Consequently, they are able to make better agreements with retail organizations.”
The company is also already working with growers outside the Netherlands, including from Germany and England.

Starting and growing in High Tech
On Friday June the 4th, the last day of Dutch Technology Week, the focus was on tech start-ups in High Tech. Two entrepreneurs from the sector talked about their companies together with Henri Schellen from Rabobank, who is helping to further build up the start-ups.

Max Aerts is CEO of DENS, a company that started off as a student team. DENS is giving the energy transition a boost with a zero-emission generator. This generates electricity on the basis of the hydrogen carrier hydrozine (formic acid). This will enable hydrogen to be applied as a sustainable energy source in a user-friendly and safe manner. Aerts explains how the innovation works.

“Hydrogen is a well-known medium for storing energy. But it is a gas, and that is not ideal as far as storage is concerned. This is much easier when it is in liquid form. We have packaged hydrogen in a transparent liquid.” This technology is used to charge work vehicles and construction lights, among other things.

More in the pipeline
It seems there is no shortage of customers for DENS. “It’s also definitely in the pipeline for further development. We are seeing a major trend of these kinds of innovations in construction. The nitrogen crisis has only accelerated it more in the Netherlands. We are responding very well to that.” The first four aggerates have now been sold and will be on their way out the door soon.

Manus VR is also active in High Tech, which produces gloves with sensors that record your finger movements and which are used in virtual reaility. This way, the company creates an experience that feels lifelike. CTO Maarten Witteveen talks about how the company started and the steps that are being taken. “We thought: everyone is using VR for game controllers, and we wanted to take that to the next level.” The steps that followed just turned out to be different than what the company initially had in mind. “We wanted to make a glove for gamers, but we had mainly business-to-business deals. Meanwhile, Manur VR also has partnerships with the likes of OptiTrack. “And we have since become well-known among the motion capture industry as a result.” So, the company managed to reach gamers after all.