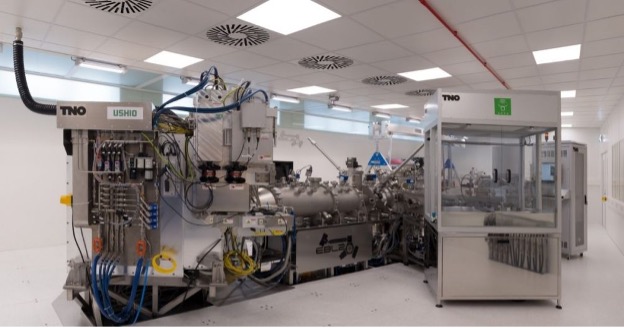 Staying on your toes in the semiconductor industry through collaboration

The semiconductor industry is on the rise. It is clear that the demand for chips, and therefore for products and services throughout the industrial chain, is at an unprecedented high. With the increasing computerization of society, the demand for ever more and better chips will only increase. Semiconductors are crucial to the economy. The Netherlands, in particular Brainport but also the cluster around Nijmegen, is clearly in the front row.

In our DNA
The Netherlands has long been good at making complicated machines to produce chips. That’s not just because ASML, the world’s largest supplier of machines for the semiconductor industry, is Dutch. “Think also of BESI and smaller players that are less known to the general public but make excellent equipment,” says Rogier Verberk, market director for Semiconductor Industry and Quantum Technology at TNO. “Complex machine building is in our DNA, so to speak. It is sometimes said that it is in our open culture, where the man with the screwdriver dares to tell the boss that things have to be done differently to get a better result.”

But we have to stay on our toes. “The fact that we are world champions in mechanical engineering is due to the fact that we keep innovating and doing it faster and faster. We have an excellent value chain,” says 44-year-old Verberk. The Netherlands has good technical universities that constantly come up with new, creative ideas. TNO and other knowledge institutes know how to convert these ideas into new concepts of machines. Companies like ASML have the knowledge and skills to bring the product to market. “This is a high-value industry with a high entry barrier. Maintaining the leading market position is crucial. If you sink, reclaiming your position is very difficult.”

A position of dependence
There is a geopolitical factor, in addition to an economic one, that is important for remaining first in class. Because the lion’s share of chips are produced in South Korea (Samsung) and Taiwan (TSMC), the dependence on these countries is very high. We see what the immediate impact that the current chip shortage is having on the automotive industry, among others. And that is not even considering the role of geopolitics.
Should China step up political pressure on Taiwan, resulting in reduced supplies to Europe, the consequences are incalculable. “The dependence on chip-producing countries would already decrease significantly if we could offer something in return.” The balance could be: we build the machines and a number of special (niche) chips, you build the large volumes and state-of-the-art chips.
TNO has highlighted two challenges in the context of Dutch Technology Week. The themes are pollution control and metrology. The goal of the day is to strengthen collaboration within the value chain. In any case, the corona crisis and the boost that the pandemic has involuntarily given to the digitalization of society has shaken up the industry. There is a realization, however, that dependence on suppliers is high. “The sensitivities in the market chain have caused parties to start thinking and asking questions such as ‘Should we not rely solely on just-in-time deliveries anymore, but also build larger inventories?’ or ‘Shouldn’t we produce closer to home?’ Some buyers are thinking about having a second supplier as a backup in case the first one can’t deliver.”
In addition to geopolitical and logistical challenges, the semiconductor industry faces many other issues. TNO has singled out two of these challenges and organized a day focused on them for players in the market as part of Dutch Technology Week on June 1st. The themes this Tuesday are pollution control and metrology. The goal of the day is to strengthen cooperation within the value chain.

Contamination control
Contamination control is about ensuring that chip machines are as clean as possible to run maximum production and reduce waste. This refers to molecular contamination, such as fingerprints, and particle contamination, such as dust and grit. The chip machine is very sensitive to dirt. Even minimal contamination can cause the machine to malfunction or fail to deliver usable chips.
“TNO has worked with ASML and Carl Zeiss to develop the latest extreme ultraviolet (EUV) machine. This machine is extremely clean inside, cleaner than in the operating room of an intensive care unit.” During the TNO Semicon Innovation Day, five speakers will present the latest insights in this field. One of them is the CEO of FastMicro, a company that has developed measurement equipment based on new detection technology from TNO. Also represented are BESI and ASML.

Metrology
The afternoon of the TNO Semicon Innovation Day is all about measuring and detecting small structures. “That is currently a big challenge in the industry. ASML’s EUV machines write the smallest structures, as small as 5 nanometers. In a way, those machines are too innovative because the inspection machines can no longer keep up,” Verberk says. That in itself is a huge compliment for the Dutch semiconductor industry.
“On June 1st we will present the latest insights from TNO and how you can carry out inspections in a new, different way.” Speakers include Barry Peet, CEO of the Chip Integration Technology Center (CITC), which focuses on the back end of the chip manufacturing process. Also, Raymond Rosmalen will explain Nexperia’s next-generation metrology. The company is both a machine builder and a chip manufacturer, offering participants an optimal opportunity to get a glimpse of both sides of the industry.